May is here and it's time once again for goals. Since I want to have two drafts done by June first, that means those novels are the focus for this month.

1. Finish rewrite, wait and then edit Tattle Tell. Send out to beta readers in June.

4. Blog more on here now the A to Z challenge is over.

Yay for another blogfest. I know we haven't had many lately and the A to Z challenge means it's a slow month on this blog but no worries. Today we get to do a blogfest and the topic this time is the Query Letter. 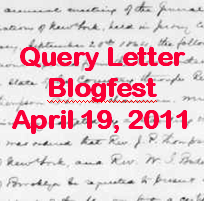 About the blogfest:
The blogfest is pretty simple. The idea is to have a query letter posted and to get feedback on ways to make it better. The exact two rules are: "post your query letter and visit at least 5 other bloggers and critique their queries."

Check out the blogfest over at Slice of the Blog Pie.

So, I was totally going to write a brand new query letter for this. Except work, A to Z blog challenge, sleep and writing got in the way so that I never got around to working on it until the night before the blogfest. That doesn't work very well for a query letter. I'm also curious for anyone who reads this part: Does the novel sound more like a middle grade one or YA?

Note: I don't have an agent list yet. So, it's a general query letter and there is no agent personalization to it for that reason. Those will come into play when I actually have novels ready to submit cause yeah, I don't have anything ready. Order of hook, novel details and such will vary a little as well.

Not all genetic mutations are fun or even useful. For 14 year-old mutant, Ephram Gray, having a temperature that can't be detected only means he will never miss school due to a fever. Working for a government agency as a spy, telling on anyone who might be a mutant, is a whole different story.

Ephram should be worrying about finding friends and passing the next test at school. Instead he has to  panic over each time the men in suits from the government agency will show up at his parents' house demanding he tell on other mutants. Being different isn't easy, keeping it a secret even harder and the worse part: one of his only friends might be a mutant. Stuck between his role as a tattle tale, the unspoken rules of friendship, and his own secrets, he must decide. Either lose a friend or disobey and face the consequences.

TATTLE TELL, a fantasy/sci-fi young adult tale, is complete at 53,000 words. Thank you for your time and consideration.

I haven't done one of these in awhile. This is an update and a goal discussion.

Posted on my other blog about MarNo and how I only wrote 6 chapters instead of the full novel goal. But I was still happy with the progress. Haven't written much in it since then because of the A to Z blogging challenge, but also I've been working on my other YA novel, the rewrite.

The rewrite is going well. I finished chapter 21 this week, which means I have only 2-3 more chapters to go. Then I take a break before editing.

New novel is going well for having only 6 chapters done. I like the main characters and can't wait to keep writing. Even picked a work in progress title for the novel thanks to Susan Kane.

My goal is to finish the two YA drafts by June 1st. I'm going to try and get the one YA book to my beta readers by that day. Granted, I had wanted to do that back at like the beginning of March but oh well. I have a minor handwritten project due May 1st. But my focus is going to be the two YA books and the paranormal romance, along with world building on this blog for a different novel.
Posted by Dawn Embers at 1:07 PM 2 comments:

In my fantasy novel that I'm using for the world building days there are elemental faeries. Not the tiny kind but they are close to the same height as the humans. But there are five types of fae, based on the elements but not the commonly used ones.

The elements I usually work with (since I'm pagan) are water, earth, air, and fire (ether or spirit is sometimes considered the fifth element). But for this novel I decided to go with a slightly different set of elements. These have more of an Asian influence.

The elements are often seen in fen-shui and chinese medicine based upon their cycles and how they affect each other. The source for the cycles listed below is feng-shui.lovetoknow.com/Nature_Five_Elements.


Wood - The most important as one of the main characters is a Wood Fae.
While the fae main character is a Wood, he doesn't always follow what is typical of his type. He is a traveller like any other wood because he has a deepened desire to see the world. If he stays too long in one place he gets antsy. He's not a fan of water. Like, he will put up with it, and he does shower so don't worry there, but he doesn't go swimming. He prefers to go by air ships instead of water ones. His mother is an Earth fae.

Wood fae wings are just that, wood but very thin but hard to break. There are certain ways to fold them too and although a bit uncomfortable, MC can tie his down at work on an air ship so that no one knows and is uncomfortable with his presence.

Aside from him, there is a pair of women who work together and one of them is a wood while the other is metal. They use their skills to combine the two elements, which can come in handy. Their wings are permanent.

Earth
As said above, the MC's mother is one but there is also his ex-boyfriend. This is a fun elements because there are many options like flowers, plants, dirt, etc that can be integrated in their appearance and wings in particular. They also get to have seasonal wings depending on the part of Earth that they have in the wings. Flower wings are a good example, though I'm guessing the ex has more masculine type wings but the mother might have flower petal ones.

Water
I don't have any particular water fae. There are some minor characters that the main character talks to when visiting his homeland, and the villain has at least one for his own uses, but no one really important in the novel is from this category. They have water wings, so they aren't permanent or even last very long and they can't fly either. But they love to swim and spend as much time in water as they can. They control the water and can do some neat things.

Metal
Aside from the female metal fae who does work with a wood one, there is one more important secondary character who is a metal fae. The wood MC meets him near the end of the book, when he has been captured by the villain and they end up working some together along with plotting. Metal is another type with a permanent wing set. It is made of thin metal and is still too heavy for flying. They don't fold up nicely like the wood ones though, so are harder to hide.

Fire
Don't have many of these. They tend to be the louder ones of the bunch but it works with their personalities. They aren't too fond of water usually for obvious reasons. Their wings are temporary, like the water ones, but are very flashy. No flying for fire fae either. They have to work on control some if living or working on anything flammable so that they don't burn things down.

This is part of the elemental research I have done, though I have more details as I need them for the story. Need to work a bit more on it.
Posted by Dawn Embers at 5:00 AM 3 comments:

The day has come: The epic giveaway to celebrate 2 years of blogging. This blog turned 1 on March 17th and my other blog (dawnembers.blogspot.com) will be 2 years old on May 1st. To celebrate I am hosting this giveaway and hope to get to 200 followers by May 1st. I have been blogging for almost 2 years and it's time to celebrate.


I am so grateful for every single follower and I hope many of you will take part in this giveaway. And for the first time ever, I am also doing some international prizes. Yep. People outside the US have chances to win prizes, which is part of what makes this an epic giveaway. And I have made two forms for people to use to sign up for the giveaway. One is for the US followers and the other is for everyone else. I wish I could share some of the prizes to everyone and not limit them to just US but I'm a little broke person living at my parent's house and working at a pizza place just recently, so can't do the massive international shipping such a giveaway would require. Maybe when I win the lottery (lol).

If I get 200+ followers on either of the blogs, then there will be more prizes given out. However, if a prize doesn't have 5 people signed up to win then less will be given. Yes, we need lots of people to enter the giveaway so I can offer many prizes. There are price limits on the books as I'm sure you could guess. But it'll still be cool cause I will buy a book for you if you win. Yay for books.

Enter by filling out one of the forms located below in this post. Please, only enter one so make sure you've got the right one before submitting. That means you only need to fill it out once, whether on DawnEmbers or here. With your help, this will be a fun, excellent and very epic giveaway.

The giveaway ends on May 2nd. Yep, I'm including the official 2 year blogiversary day. So, get your entry in by May 2nd. If you have any questions about the prizes or any part of the giveaway form, email me at DawnEmbers(at)ymail(dot)com.

Closed
Posted by Dawn Embers at 5:00 AM 6 comments:

Dawn Embers
I am a writer still trying to find the right path. A multi-tasker, distracted writer with many different novels and still have hopes of someday becoming published. I have a blog on writing in general, a blog on my own writing and fitness, and a book review blog.