Anniversary and Luck of Irish Blogfest

I first started this blog on wordpress to see if I'd like it over there but couldn't figure out how to even get a decent template up, so decided to stick with blogger. Even though I already had a blog using blogger (dawnembers.blogspot.com) I didn't like posting too much of my own writing on that one. I wanted to keep it about the subject of writing in general instead of always about my writing and with the addition of blogfests, I wanted a different place to post. Thus came It's in the Book. Hard to believe that I've only have the blog for a year considering this blog now has more followers than my first one, which is turning 2 in the beginning of May.

I will be holding a giveaway soon in celebration for this blogiversary and my official 2 year anniversary of blogging. I don't have things ready yet, but when I do I will post here and on the other blog. I hope to get 200 followers during the giveaway too, and there may be more prizes if I do. For now, have a piece of cake and enjoy the one year anniversary post.


Now for the blogfest. 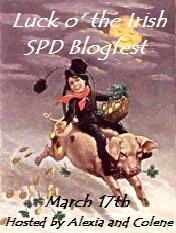 Since today is the 17th of March, also known as St. Patrick's Day and over at cejourney it is the Luck o' the Irish SPD Blogfest. There are two hosts, but Colene's blog is the one where I heard about and signed up for this blogfest.

Blogfest Rules:
According to Colene's blog - "Write a 200ish word flash fiction entry about something to do with SPD(real, fantasy, whatever makes your pig squeal). OR, you could also write about a memory you have of a past SPD. In the end, we aren't being picky. Just make it goooood and make it about St. Patricks Day! (Leprechauns, luck, gold, green, clovers, beer, celebrations, etc. Funny, touching, horrifying, dark, fast-paced, romantic, etc.)"

Soon as the door was shut, Jack jiggled the handle to double check whether he had locked it or not. If his boss wanted to check his room for whatever reason, he had the key, but he hoped no one else would be able to get in during his first official two days off. With him, he had a small bag with some clothes for the next day and he wore a casual outfit. Green shirt and green socks were paired with black pants and shoes. He was happy to have his first time off being St. Patrick's day because his friends had already complained about his constant working and tonight was their annual green party. He could not only make it but not worry about how much he drank since he had tomorrow off too. But as he headed towards the front door, he only made it to the front room.

"But that's not fair." Alexa stood near the front door, purse in one hand and arms crossed over her chest as she pouted. She wore a glitter covered, dark green sleeveless shirt and a lighter green skirt. The high heeled shoes matched her shirt. "You let Ella and Bri go to parties. Why can't I go?"

Jack's boss, Alexa's stepfather shook his head. "I know the people they went out with. There won't even be alcohol there. You want to go to some beer party with a bunch of miscreants and I won't have it."

"Why can't he come with me?" Alexa pointed to Jack, which caused him to grimace.

He was so close to being out the door and off duty. A change of that would really suck but for once he didn't see his boss caving to the whims of the females in the house.

"No. Jack is not working tonight and even if he was, I am not letting you go to a hippie party."

Alexa looked ready to pretend to cry but she didn't do it this time. Instead she whined more. "But it's Saint Patrick's Day. I want to go have fun. Mom would let me go. Isn't there anywhere I can go?"

Then his boss looked up at him, his eyes almost had a look of pleading to them as he spoke. His voice wasn't as strong as it usually was when he made orders. "Jack. Do you have plans tonight?"

Jack fought a sigh before responding. "Yes sir. There is an annual party my friends host."

"Will there be drugs?"

It sounded like a trap but luckily the answer was an honest one. "No."

"I know it's your night off but would you, as a favor to me, take Alexa with you?" He said and continued before a yes was given. "Make sure she only has two drinks max, no shots, and don't let her hook up with some stranger. I'm counting on you to watch over her."

As usual, there wasn't really a way he could say no. So, Jack nodded even though he almost didn't want to go to the party now. He had no idea how Alexa would act around his friends nor did he want to find out. Without a choice, Jack lead her out the door as his mind tried to figure out how he would not only explain her presence but also how to make his job sound more that a personal assistant to the rich girl. It was going to be a long night.
Posted by Dawn Embers at 8:26 AM

So were you the PA or the daughter? This sounds like a memory post.
Great piece -- I wanted to smack all three!

I'm with Mary. Give them all a smack!

That's what he gets, being a nice guy and all. Just when he's ready to step out in his green socks. Will have to see what happens. Sigh

Thanks for the comments.

Mary Vaughn - umm, this is strictly fiction. Just something I wrote today that goes along with a story I am writing through blogfest entries known as Cinder Story for now.

Michael Di Gesu - lol. Indeed, poor Jack and who knows what Alexa will do around his friends.

Susan Kane - Ah yes, the nice guy factor. I considered using the second stepsister but Alexa is just too fun to not use for this. The rest of this piece should be fun.

Ooh, is Alexa going to try to hook up with Jack? Very intriguing. That'd serve his boss right!

Alexia - hehehe, interesting idea but no. Jack would be fired and also, he wouldn't do it anyways because he's gay. But I see where it might seem like that could happen. ;-)

Poor Jack! It's a bummer when you think you're getting the night off - but when you add the bosses daughter in, how's a bloke to relax and have a good time?

PK Hrezo - lol. Nothing wrong with them for me. The stuck up business man just doesn't care for them. ;-) Nice to meet you as well and Happy St. Patty's Day.

Jennie Bailey - Exactly and it's the one who likes to push his buttons, of course. hehehe

See, if Jack hadn't spent so much time jiggling the lock, he might have made it out of the office before the spoiled rich girl showed up. Darn OCD and all the issues it causes.

Nicely written! Feels like a snippet from a larger piece, but still has great tension for such a wee-sized offering. :)

How did I miss you yesterday! I'm so sorry! This was a wonderful bit! Poor Jack!!

Tracy - lol. True. Since his room is boring with nothing really to hide he might have escaped better if he just hurried without concern over the lock.

mybluescreen - Thank you. It is a snippet, you are right. I'm not much of a flash fiction writer, and this is a novel I'm writing through the use of blogfests.

Colene - no worries. I don't mind a late comment. I'm glad you liked it. The blogfest was fun.

OMG I cannot believe I missed this during the 'fest!!! (ok in my defense I was off to Paris right about then...)

Poor Jack, having to take his boss's daughter along! You sure know how to torture the boy. I wonder if she behaves or not... I'm guessing not... ; )

Tessa - lol. Can't believe you missed it either since I posted your favorite character. That's okay. I hope to post the rest of the scene soon, so pay attention. *winks*

Dawn Embers
I am a writer still trying to find the right path. A multi-tasker, distracted writer with many different novels and still have hopes of someday becoming published. I have a blog on writing in general, a blog on my own writing and fitness, and a book review blog.